Our winery in Pollensa, in Mallorca Premium Review | Can Vidalet
31 July, 2019 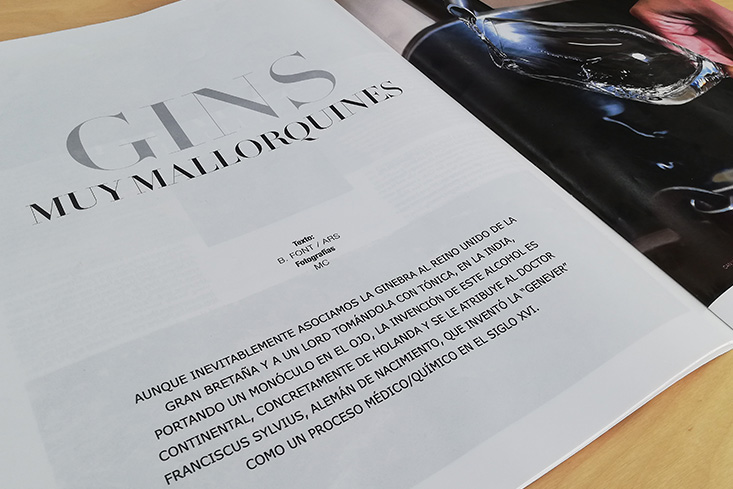 Via social media and specialist magazines we are always receiving wonderful feedback regarding our hard work. The latest mention which we received was from Mallorca Premium Review, the magazine published by Diario de Mallorca which discusses society, culture and gastronomy. On this occasion, they decided to feature, ONZE, the gin from our winery in Pollensa, in amongst their special on Mallorcan gins. “Now Mallorca is seeing the production and consumption of 100% Mallorcan gins” they stated. Would you like to know what they had to say about our gin? We will be giving you all the details in this blog article.

Our artisanal gin, amongst the “very Mallorcan gins”

“Onze is produced by winery Can Vidalet in the municipality of Pollença, in the enviable setting of the Tramuntana Mountains. Onze (which is Spanish for eleven) is a London Dry Gin, whose name refers to the eleven botanical extracts used to create it” begins Mallorca Premium Review. The gin at our winery in Pollensa had the honour of commencing the examples by the magazine which represented “very Mallorcan gins”.

One of the aspects highlighted in the magazine is its artisan distillation system. Mentioning aspects which complement our oenologist, Elisabeth Fuentes, explaining that when making the gin, grain alcohol is used in which fruit is added and macerated for 5 to 7 days with the 11 botanicals. “They include juniper, tarongí, rosemary, lavender and oranges from Sóller, in fact from the Can Vidalet estate itself” they add. “Next the alcohol and the botanicals are distilled in the still at Can Vidalet, which is worthy of mention as not all gin producers in Mallorca have their own on-site still” they conclude.

A very special distillation at our winery in Pollensa

In their extensive review, they continue explaining that distillation is carried out in small batches and that this process is divided into heads, hearts and tails. “At Can Vidalet, only the heart is taken to create the Onze gin; a process which is important for temperature control and passion for a job well done, key factors for obtaining a good quality gin” they explain.

“The result is a dry, aromatic gin, with notes of rosemary, lavender and citrus fruits obtained with an artisan distillation system. Can Vidalet also produces orujo (pomace brandy) at the same distillery, which is then sold at its shop in Pollença” this is how they end the section in which they feature our Onze gin.

Thank you for your kind words!

At Can Vidalet, our winery in Mallorca, we would like to once again thank Mallorca Premium Review for their very kind words and dedication. We hope to see them in the future!