Indigenous grape varieties of Mallorca and their history | Can Vidalet
7 March, 2020

Indigenous grape varieties of Mallorca; a journey through history 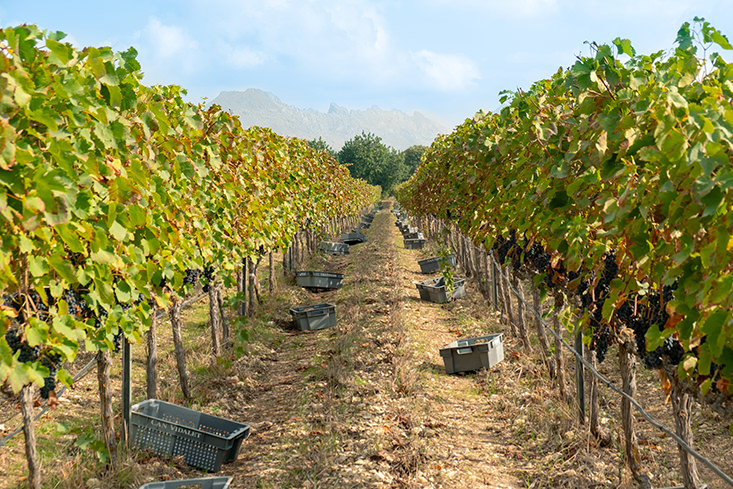 It is well known that the relationship between wine and Mallorca started a long time ago, more specifically to before the 5th century BC, when there is evidence of its consumption by the Mallorcan population. With regard to the introduction of vines, a clear point of origin has been established, and it was with the arrival of Quintus Caecilius Metellus in the year 123 (AC), who we will be talking about later and who gives his name to some of the most exclusive wines at Can Vidalet.

The wine making activity in Mallorca was so crucial that in the oldest wine encyclopaedia (Naturalis Historia) and referenced in the following centuries, written by the roman author Pliny the Elder in the year 77 BC, he refers to the wine of the Balearic Islands as some which “could rival the best Italian wines”, with all the importance which they held within the Roman empire. Since then this activity has continued uninterruptedly, even surpassing the period of Islamic conquest between 902 and 1229, a time during which cultural limitations were overcome by defending a lifestyle which dates back many centuries.

The first studies of the indigenous grape of Mallorca

Although many different studies (Despuig, 1785) speak in detail of the various works relating to the production of different types of wine, especially in the regions of Binissalem, Santa María and Banyalbufar, it wasn’t until the end of the 19th century when Lluis Salvador, Archduke of Austria spoke of the grape varieties of Mallorca and their different uses, for both regular consumption and for the production of wine. This work is complemented by the Report on the State of Agriculture, in the year 1876, a moment during which it is estimated that around 19 thousand hectares and up to 45 grape varieties were produced during this time in Mallorca. Amongst the most distinguishable varieties we see Giró, Gargollasa, Fogonéu, Escursach and Valent negre of red variety and Prensal Blanch, Moscatell, Malvasía, Valent blanch and Vinater of white variety. Ironically the varieties Manto negro and Callet, which are currently the most used varieties, don’t appear until they are seen in reports dating back to 1892, although their use is rapidly expanding due to their great adaptation to the islands weather, generous production and to a greater extent, their resistance to phylloxera.

The appearance and spread of phylloxera throughout Europe at the end of the 19th century led to the use of some grape varieties over others that were more resistant. In some areas where some varieties dominated at the end of the 19th century, a transformation took place after the phylloxera invasion, with other varieties establishing themselves such as Ciusant, Callet, Manto negro and Batista, all to a much lesser extent as the disease had caused havoc for the islands wine production, as was the case in the rest of Europe.

In the mid-20th century, with the rise of tourism in Mallorca, the wine making industry suffered a decline in production. From the 1990s onwards, a series of local and foreign investors decided to invest in Mallorcan wine in order to promote the local culture and reinforce this deep rooted feeling for a product that was so important in the past. As a result, wineries were opened that wanted to promote the quality of local wine, prioritising the indigenous varieties over the rest. Today, most of the islands almost 2,000 hectares of vineyards are planted with Callet, Manto negro, Fogoneu, Gargollasa of red grape and Premsal Blanch, Moscatel, Malvasía and Girò Ros of white grape.

Nowadays, there is a boom in the number of wineries on the island due to the great demand for quality wines in both domestic and foreign markets. But, within artisanal work that is adapted to the wonderful geographical location of the north of Mallorca, the winery at Can Vidalet carries out a work focusing on recovering the wine and historical heritage of the island of Mallorca. This commitment means that up to 40% of its production is made from indigenous grapes and it puts on the market wines such as Blanc de Blancs and Blanc de Negres, made from 50% indigenous grapes, or the Barros de Cecili, made from 100% indigenous grapes, after its resting process in its underground stone cellar.

Can Vidalet’s promise to work responsibly with its land goes beyond this and is a long term process with a clear aim: to recover the wine-growing heritage of the island of Mallorca through humility and hard work. To achieve this, work is being done to recover different indigenous varieties, some of which have disappeared or were abandoned in the past. The red grape varieties of Gorgollassa, Manto negro, Escursac, Giró negre and Callet, and white Prensal, Giró ros, Malvasía, Valent blanc and Vinater blanc are represented in a museum aimed at recovering the aromas and flavours of some varieties that disappeared from the vineyards of Mallorca due to various circumstances. Don’t miss the opportunity to observe the laborious work of recovering the indigenous grape of Mallorca while tasting a selection of the best wines accompanied by local cured meats!